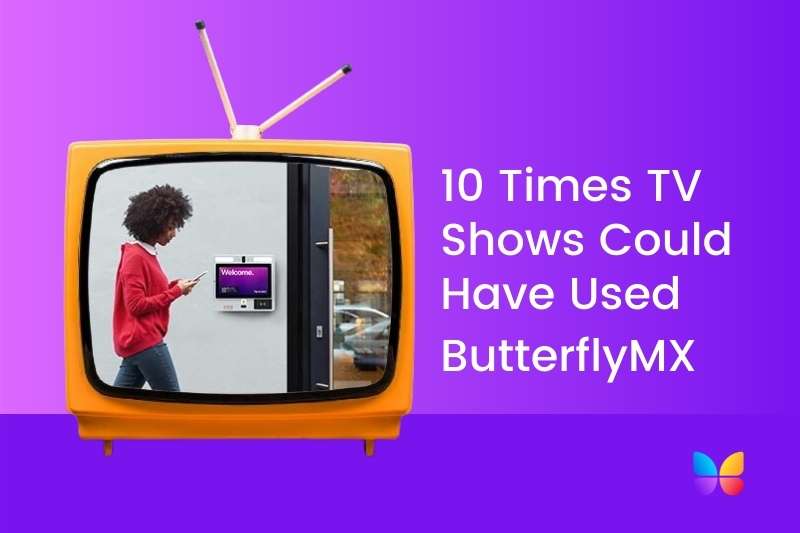 Over the last century, American cities have grown in popularity. Whether it’s New York City, Los Angeles, or somewhere in between, Americans can’t get enough. In fact, we’re so infatuated by city life that Hollywood often makes them the setting of our most favorite sitcoms…but city living isn’t always easy. Apartment dwellers have to deal with nosy neighbors, limited space, and constantly worrying about missing deliveries!

Here’s how 10 of our favorite TV shows could have avoided some major mishaps if they had ButterflyMX in their apartment buildings.

Students at Greendale Community College get into all kinds of shenanigans — including during Season 3, Episode 4 when we join study group members and dynamic duo Troy and Abed for their housewarming party.

When the pizza delivery arrives, Jeff rolls a die to determine who has to go downstairs to get the pizza, and Troy’s the unlucky one. Troy races down and returns to Pierce having been shot and an apartment that’s (literally!) up in flames.

With ButterflyMX, Troy simply could’ve let the pizza guy in through the app and never would’ve had to leave the apartment at all!

Oh, it’s never a dull day with the Belchers! Linda’s sister Gayle invites her new beau to their over-the-restaurant apartment for their second date in Season 6, Episode 6. Bob also invites his new friend Steve to join. When the doorbell rings, Gayle is nervous, excited, and maybe has a mini-freak out over his arrival, only to find out that it’s… Steve, not her new guy (who we later find out is Mr. Frond). Poor Gayle’s nerves could’ve been spared if the Belchers had ButterflyMX’s video intercom at that moment!

Set in 1980s Brooklyn, Everybody Hates Chris follows a young Chris Rock, who in Season 2, Episode 19 bets on a basketball game and enters the world of sports betting.

“Chrissy the Black” then gets in a little bit over his head, which leads to a house call from big-time bookmaker Paulie the Bookie. Paulie comes up for a talk with Chris’s mom Rochelle, who was totally unaware that her own son was indeed “Chrissy the Black.”

If Rochelle’s building had been equipped with ButterflyMX, it’s hard to imagine Paulie — an uninvited visitor — would’ve made it through the building’s entry and all the way upstairs without her knowing. And maybe Chris’s cover wouldn’t have been blown!

Now this one’s a classic! In the midst of a quiet Scrabble game during Season 3, Episode 27, Ricky and Lucy get a surprise visit from Cousin Ernie, Lucy’s “mother’s friend’s roommate’s cousin’s middle boy.”

Before Ernie rang their doorbell with a suitcase in tow, prompting a “Who’s that?” from Lucy, it might have been nice to be able to verify that it was actually him via a ButterflyMX video intercom! While the 1950s may have indeed been a simpler time, you still can never be too careful.

Hilarity ensues in pretty much every episode of Broad City, in which two 20-something BFFs navigate life in New York City.

When Abbi’s neighbor and crush Jeremy asks her to sign for a package while he’s out of town during Episode 3 of Season 1, she’s sure to make note of the package’s 10 a.m. ETA — but the courier arrives at 9:49 and takes the package all the way back to the distribution center on North Brother Island! Abbi then has to take THREE separate modes of transportation to retrieve it. *facepalm*

With a secure, PIN-protected package room, Jeremy would’ve been able to rest assured that his delivery would be safe until he got back. And there would’ve been no need for Abbi to go on an outrageous voyage!

In Season 3, Episode 15 of New Girl, Nick’s jealous ex-girlfriend Caroline arrives banging on the door to his apartment and delivers a sharp “You stole my boyfriend!” to his new beau, Jess.

With ButterflyMX, a tenant can share virtual keys with authorized guests — and revoke them anytime. So, you can easily avoid awkward situations with an ex by deleting the virtual key you created before the breakup.

In the pilot episode of Perfect Strangers, Balki knocks on the door of his distant cousin Larry’s Chicago apartment. As it turns out, Balki’s fifth cousin three times removed is a step-uncle to Larry’s father on Balki’s mother’s side… two continents removed. (Or as Larry says, the two are “related by rumor.”) Balki comes from the island of Mypos to make himself at home with Larry, who had no idea whatsoever he had this cousin, let alone a new roommate.

ButterflyMX may not have stopped Balki from making the trip from the Mediterranean, but Larry would’ve at least gotten a heads up before this “perfect stranger” showed up at his door!

Every day at the classic Friends apartment was filled with crazy adventures. Out of the many friends, guests, and unexpected visitors who knocked on the iconic purple door, one of them happened to be an upset restaurant owner. In Season 4, Episode 9 of “The One Where They’re Going to Party,” Monica was forced to confront Allesandro after she wrote a bad review of his restaurant.

Although her building had a simple analog intercom, that buzzer system was not enough to keep Allesandaro from knocking on Monica’s apartment door. If the building had a ButterflyMX video intercom with a mobile app, Monica could have seen Allesandro at the front door and decided not to grant him access.

2. How I Met Your Mother

Ted and Jeanette’s relationship consisted of many crossed boundaries including overstaying their welcome and Ted being kicked to the curb of his own apartment. With ButterflyMX, Ted could have easily revoked or denied access to Jeanette. He could have also seen how many times she attempted to enter his apartment with a date and time-stamped photo audit trail. But hey, better luck next time Ted!

Elaine’s former roommate Tina, from whom she’s now subletting a unit, swings by the office to tell Elaine that she (Elaine) is “getting kicked out.” When Elaine protests, we learn from Tina that Elaine committed a cardinal sin of apartment life: She buzzed up a stranger who turned out to be a jewel thief!

While the Season 5, Episode 22 shenanigans are funny, you’ve gotta cut Elaine some slack. She didn’t have a ButterflyMX video intercom! If she’d seen a suspicious person appear on her phone, she definitely wouldn’t have let him in.

Yes, the whole point of a sitcom is that it’s all for laughs, but in real life, convenience is key — and more importantly, so is safety! Making sure only authorized tenants and visitors have access to your property is paramount.

When your building has a ButterflyMX video intercom system, missing packages, surprise visitors, and unauthorized access are things of the past. Residents have the power to remotely let friends and delivery carriers in — or ignore the people they’d rather not let in. The bottom line? Keeping your residents and their guests safe and sound is no laughing matter!